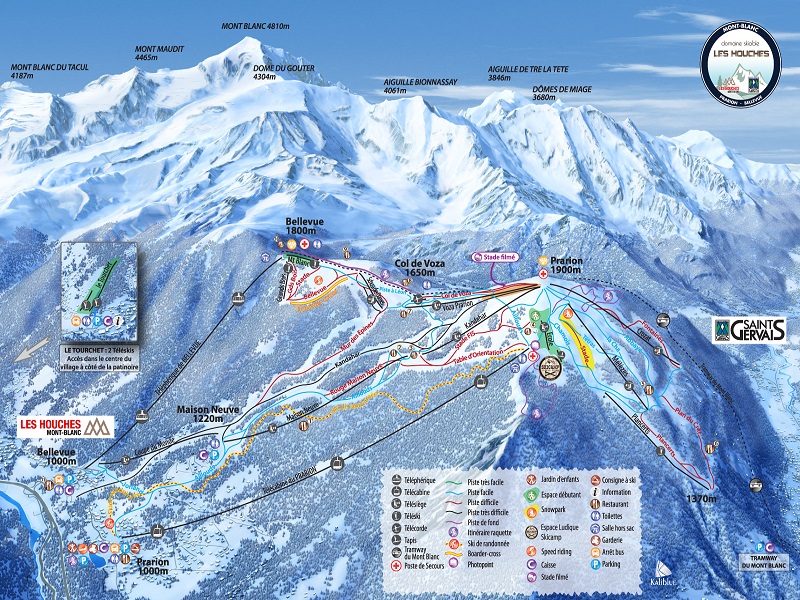 The Les Houches ski area is closely linked to the Chamonix ski areas – being just 6 kilometres away, quite often when the weather is bad in Chamonix on the slopes high up, Les Houches is normally open – being slightly lower down it is less affected by high winds – the skiing here goes from the 1000m lift bases, all the way up to 1900m. Likewise, when the weather is nice, the ski area actually gets a bit quieter meaning you get to enjoy some of the stunning views of the surrounding areas in a quieter environment on the slopes - a win-win in our book!

Due to the lower altitude of the runs here in Les Houches, you can enjoy some lovely tree-lined routes all the way from the top of Prarion all the way back down to Les Houches village. Upon the mountain you will find the main teaching area at the top of the Télécabine du Prarion – these then lead to all the gentle blue and red runs from the summit such as ‘Abbaye’ which is a nice cruisy blue down to the TS du Crozat.

To really make the most of a week-long ski trip to Les Houches and its surrounding areas, we recommend getting a Mont Blanc Unlimited pass – you are connected to the different areas by train and by bus, but it is a great way to get to know the valley and the many resorts it features.

With only the 1 black run in Les Houches (the World Cup Downhill Course) you would be forgiven for thinking that this is not a resort for the advanced skiers – well you would be wrong! The resort holds some nice red runs with some great views to look at as you tackle your way down, but it also has some great tree-lines, but the biggest pull is the fact that you can still ski the rest of the Chamonix area. This means that you can still ski the Chamonix areas – of which the Grands Montets area is the most challenging – but do it cheaper whilst remaining in a great spot (especially if the weather is poor – all the skiing tends to end up being around Les Houches anyway!) to beat the crowds!

Les Houches is awesome for intermediates. Whilst it may not be the largest ski area in the world with around 55kms of piste skiing available to the resort directly, it offers a great variety of terrain with some easier blues from the top of Prarion to long reds and blues back into the village such as the Aillouds blue run down to the bottom of the Les Houches-Prarion gondola. If you feel like taking on a different challenge on your trip and you have the Mont Blanc Unlimited pass, then make your way over to the Brévent-Flégère ski areas which also has a nice mix of blue and red pistes to be tackled.

The main beginner areas are located right at the top of the Télécabine du Prarion – these offer a great starting point for those who have either never skied before or are perhaps slightly more apprehensive about there ability! The beginner area is served by two lifts – Ecole and Ecole 2, these two lifts will act as a great springboard to more enjoyment with some stunning views to take in whilst you learn. The next place to head to for beginners would be the gentler blue runs from the top – the Abbaye run down the other side of the mountain is a nice cruisy run through the trees and will allow you to get more miles under your belt!

The local area is not too bad for snowboarders, at the top of the Kandahar and Voza Prarion chairlifts the slopes are slightly flatter, and there are lots of draglifts around, but you can still almost get around the entire area without having to use one (the only exception is if you head down to Plancerts). Les Houches is also home to a terrain park – this is better suited to beginner/intermediate riders as opposed to the more advanced riders who may find themselves a bit bored in that particular park. They also have a boardercross as well which can be found around the Bellevue and Col de Voza areas.

Where to start with this? Well, there is some great tree skiing around Les Houches if you have the snow conditions for your ski trip. Otherwise, we seriously recommend booking a guide to take you to test your skills on some of Chamonix’s freeriding heaven. The world-known trail ‘La Vallee Blanche’ is a must for anyone who considers themselves a keen off piste skier/snowboarder – though it can be fairly flat in spots for snowboarders – the run is 24km long at full, though weather and snow conditions can affect how far you are able to go sometimes. This route is definitely worth the effort for the scenery alone!

To find out more about skiing in Les Houches feel free to contact one of our friendly Ski Experts on 023 8020 6971 or email sales@skiweekends.com